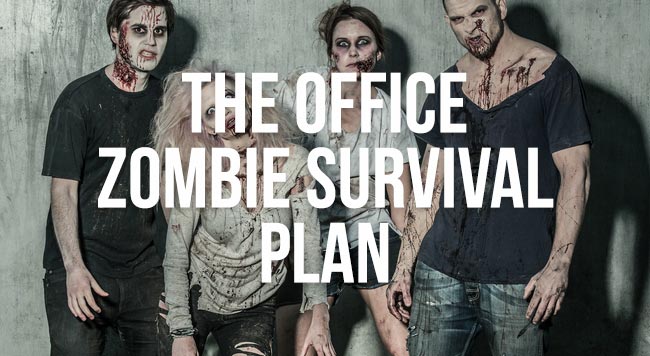 As another season of The Walking Dead kicks off and Halloween draws closer, it’s not uncommon to start to wonder, what happens if the zombie apocalypse arrives any time between 9-5, Monday to Friday? And while your boss is hardly about to line up your colleagues Negan-style and threaten to beat them with a baseball bat (we hope) you should have an office contingency in place should the living dead check in at reception.

Luckily we here at Company Away Days have long thought of all the zombie fighting possibilities and have come up with three scenarios for office survival.

It’s lunchtime and as you go to leave the office you notice a mass panic in the streets below. The zombies have arrived. It’s time to lock this positive working environment down. Fast.

The boss has had a flu for some weeks. Except today he’s been quieter in his office than usual… Less coughing… Less asking for sympathy… Less Lemsips being prepared in the staff kitchen… You go in and check on him and find that he’s converted to a zombie.

The hordes are amassing at your door and it’s only a matter of time before the office is swarming with zombies, and not the kind who stayed up late partying (on a school night?!?). It’s time to make your way to your local pub, have a nice pint and wait for this all to blow over.

10 Characters You Find in Every Office