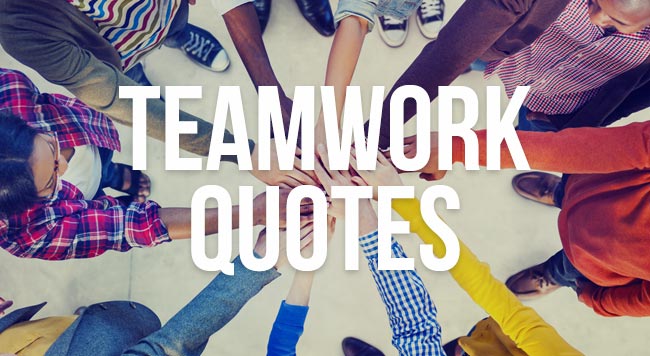 “It is not a question of how well each process works, the question is how well they all work together.”
– Lloyd Dobens

“The nice thing about teamwork is that you always have others on your side.”
– Margaret Carty

“Individual commitment to a group effort – that is what makes a team work.”
– Vincent Lombardi

"Teamwork is the ability to work together toward a common vision. It is the fuel that allows common people to attain uncommon results."
– Andrew Carnegie

"Remember, teamwork begins by building trust. And the only way to do that is to overcome our need for invulnerability."
– Patrick Lencioni

"None of us is as smart as all of us."
– Ken Blanchard

"The best teamwork comes from men who are working independently toward one goal in unison."
– James Cash Penney

“Just like the cast of a great movie and the career of great athletes few success stories are a one man show. Build your team and grow.”
– Rasheed Ogunlaru

“An army is greater than a warrior.”
– Matshona Dhliwayo

“A good team needs three things: the right people, the right spirit, and a couple inside jokes.”
– VanillaCreamPie8888

“The ability of a group of people to do remarkable things hinges on how well those people pull together as a team.”
– Simon Sinek

“A team is more than a collection of people. It is a process of give and take.”
– Barbara Glacel & Emile Robert Jr.

“It’s as simple as this. When people don’t unload their opinions and feel like they’ve been listened to, they won’t really get on board.”
– Patrick Lencioni

“A man’s pride can be his downfall, and he needs to learn when to turn to others for support and guidance.”
– Bear Grylls

“If you can laugh together, you can work together.”
– Robert Orben

“You need to be aware of what others are doing, applaud their efforts, acknowledge their successes, and encourage them in their pursuits. When we all help one another, everybody wins.”
– Jim Stovall

“Team player: One who unites others toward a shared destiny through sharing information and ideas, empowering others and developing trust.”
– Dennis Kinlaw

“A group becomes a team when each member is sure enough of himself and his contribution to praise the skills of the others.”
– Norman Shidle

“The way a team plays as a whole determines its success. You may have the greatest bunch of individual stars in the world, but if they don’t play together, the club won’t be worth a dime.”
– Babe Ruth, American Baseball Player

“It is amazing how much you can accomplish when it doesn’t matter who gets the credit.”
– Harry S. Truman

“Teamwork is so important that it is virtually impossible for you to reach the heights of your capabilities or make the money that you want without becoming very good at it.”
– Brian Tracy

“The path to greatness is along with others.”
– Baltasar Gracion

“Teams share the burden and divide the grief.”
– Doug Smith

“The whole is greater than the sum of the parts.”
– Kurt Koffka

“No matter how brilliant your mind or strategy, if you’re playing a solo game, you’ll always lose out to a team.”
– Reid Hoffman, LinkedIn co-founder

“People have been known to achieve more as a result of working with others than against them.”
– Dr. Allan Fromme

“The ratio of “We”’s to “I”’s is the best indicator of the development of a team.”
– Lewis B Ergen

“A boat doesn’t go forward if each one is rowing their own way.”
– Chinese proverb

“If I have seen further than others, it is by standing upon the shoulders of giants.”
– Isaac Newton

Make 2017 Your Most Productive Year Yet

Getting the Most From Your Event