Make 2017 Your Most Productive Year Yet 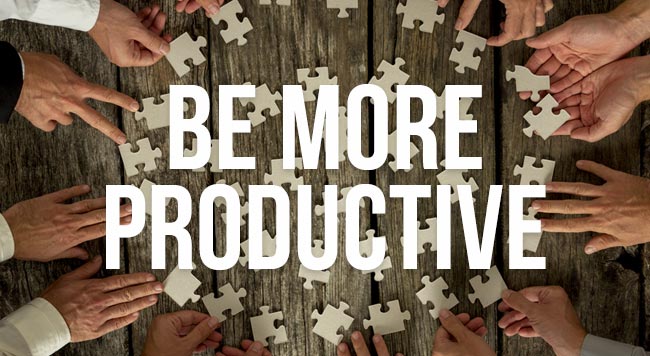 Here’s a mind-boggling fact. We’re three whole months into 2017. When did that happen? Suddenly all the goals you set at the start of the quarter are beginning to slip into the distance, and you need to turn things around, fast.

Sound familiar? Well the first thing you should know is that we’ve all been there. And the second thing? That you’ve got the power to set things straight, you just don’t know you do. Which is why we’ve put together our 6 ways to make 2017 your most productive year yet.

Just hear us out! Taking five minutes for yourself can seem counterintuitive on first glance, but making sure you’re scheduling regular breaks throughout the day can actually improve your concentration. Recent studies have shown that working for long periods of time often results in a decline of performance. While those who pause, even for a moment, actually enjoy a more consistent level of work.

“People who are crazy enough to think they can change the world, are the ones who do” – Rob Siltanen

We’ve got a horrible truth for you. Nothing you do in work will ever be perfect. So instead of wasting time trying to achieve the impossible, simply do the best you can on any given task and progress. If you encounter issues with the objective further down the line, then you can always make small amendments later. What matters is getting the job done.

Personalising your work area, whether it’s with a specific desk calendar (football, TV show, movie etc), potted plants or just pictures of the family can raise productivity by 15%. How hard you work, more often than not, comes down to how happy you are. And if you’re surrounded by things that bring a smile to your face, then you’re probably going to feel an increased motivation.

“Don’t watch the clock; do what it does. Keep going” – Sam Levenson

It can be all too easy to spend lunchtime in front of your computer screen, checking up on emails and more often than not, still working. Does that sound like a break to you? Instead consider getting outside and taking a walk. Not only will it do you wonders to give your eyes a much-needed break, but exercise has also been scientifically proven to be a huge motivating factor due to the “feel good” chemicals it produces. Nice.

“If the plan doesn’t work, change the plan but never the goal” – Anon

It’s an idea so simple and easy, it’s shocking that more people haven’t heard of it. Instead of allowing small tasks to build up, if you recognise a job that can be finished in less than 2 minutes, take it on immediately. Not only will this clear up a potentially cluttered schedule, but it will also take less time than returning to the task later on.

“A person who never made a mistake, never tried anything new” – Albert Einstein

The boffins at Atlassian have revealed that the average office worker spends a shocking 31+ hours each month in unproductive meetings. Now think to yourself, how many meetings have you attended in the past year that bore no fruits and served to do nothing more than waste your time? Next time, before you click “attend” on that calendar invite, just think, is there a better way to solve this problem? More often than not, the answer is yes.

“Doubt kills more dreams than failure ever will” – Karim Seddiki