10 Characters You Find in Every Office 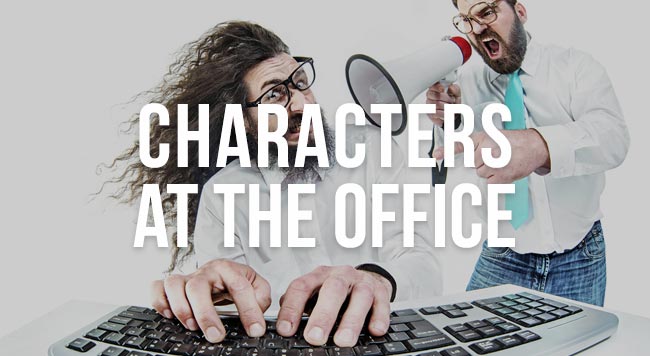 The al-desko chef, the stationary hoarder, the office jester and “the boss” … Every office has them and because it can be easy to forget the brilliant characters you find in the workplace in the midst of all the deadlines and targets, we here at Company Away Days HQ have decided to shine a light on the forgotten heroes of the 9-5.

You know the type. Naive, innocent, and blissfully unaware of all the intricacies and sub-plots surrounding office politics. Usually on a University placement or (even worse) just graduated, they’re often fresh-faced, annoyingly peppy and frustratingly optimistic. But on the upside, it is nice to finally have someone else to make you a Monday morning cuppa, and once you’ve had said caffeine dose they aren’t that bad.

Many of us settle for a meal deal in work, or perhaps even a homemade sandwich and a packet of crisps. But for some culinary minded colleagues that simply isn’t good enough. First you hear the ping of the microwave, before the “chef” arrives with an empty Tupperware container, and then you get the smell. Some days good, other days you wonder whether reheating the previous evening’s lentils really constitutes as “lunch”.

Every office has the occasional “bake off” for charity since GBBO took to our screens but these oven-mitted men and women take things to a whole new level. Best of all their baking isn’t even restricted to these special days in the office calendar so on any given Tuesday you could be treated to fairy cakes, muffins or a chocolate gateau “just because”.

Whenever the office seems to be in a drought of pens, pencils or cello tape you can count on The Stationary Hoarder to have a steady supply. In this desperate time, TSH comes into his/her own and the envy of the entire workplace, until new equipment is delivered or people begin to suspect that TSH was behind it all along. But with little or no evidence, the mystery must continue…

Usually a particularly charismatic sales person, The Office Jester is obsessed with taking the spotlight… Either by making you laugh, or by making other people laugh by making you the punchline of his jokes. But while TOJ is a reliable source of comic relief, secretly everybody can’t wait to see his/her downfall. It’s only a matter of time…

The big one. The head honcho. The top dog. The Boss isn’t just a manager, The Boss is lord of the office, master of all they survey and, quite frustratingly, not actually the boss. But while they strut about the cubicles doing their best David Brent impression, you know that they’re a great source of motivation and if The Boss ever left, there’d be a huge void to fill. But you still wouldn’t miss the cringey jokes!

Water cooler talk is usually dominated by the weekend’s football results. And The Pundit knows it all, down to the possession stats and the number of passes played… by each individual player. He’s usually the kingpin of the office fantasy football league and no matter how close you get to dethroning him, he always finds a way to come up trumps. Time to establish a financial fair play rule?

The Administrator isn’t the administrator that your office deserves, but they’re the administrator your office needs right now. Or at least that’s what they tell you, as email after email floods into your inbox of how the kitchen was left a mess yesterday afternoon. Although, even if you’d never admit it, the office would fall apart without them and were it not for The Administrator, The Stationary Hoarder would enjoy a reign of terror with all his/her hidden office supplies.

What a great weekend it was, unforgettable memories, big nights out, Sambuca shots at 2am in the morning and up in time for a 5K colour run… And The Weekend Warrior can’t wait to tell you all about it. It’s not that TWW thinks your perfectly ordinary (and totally chilled) weekend spent shopping and sitting in front of the TV was boring, it’s just “not for them”.

The office needs The Agony Aunt. Without her, morale would stoop to an all-time low, or at least, that’s what she thinks. Although she can be a genuinely brilliant listener in times of stress, TAA often falls a little on the annoying side as she constantly checks if you’re alright like a concerned Mum. But while you groan now, when you’re worried about targets in a busy quarter, there’s nothing better than a cup of tea and a chinwag with your office Agony Aunt to set your mind on the straight and narrow.

Summer in The Workplace – Make The Office The Place To Be