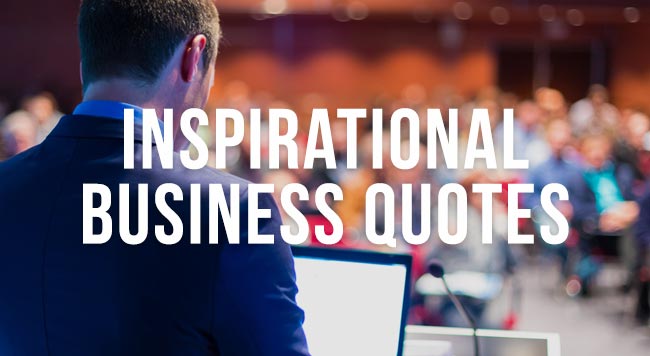 Business is, more often than not, fun. But on some days (we’re looking at you Monday) getting in the right gear to kick on can be a bit of a challenge. Company Away Days have complied the ultimate list of inspirational business quotes so you can pour yourself that morning coffee and get started.

“Leadership is a potent combination of strategy and character. But if you must be without one, be without the strategy.”
– Norman Schwarzkopf

“If you see a bandwagon, it’s too late.”
– James Goldsmith

“Business opportunities are like buses, there’s always another one coming.”
– Richard Branson

“There’s no shortage of remarkable ideas, what’s missing is the will to execute them.”
– Seth Godin

“Far and away the best prize that life offers is the chance to work hard at work worth doing.”
– Theodore Roosevelt

“Even if you are on the right track, You’ll get run over if you just sit there.”
– Will Rogers

“Imagination is everything. It is the preview of life’s coming attractions.”
– Albert Einstein

“Every accomplishment starts with a decision to try.”
– Anon

“A business has to be involving, it has to be fun, and it has to exercise your creative instincts.”
– Richard Branson

“I feel that luck is preparation meeting opportunity.”
– Oprah Winfrey

“I like thinking big. If you’re going to be thinking anything, you might as well think big.”
– Donald Trump

“The only way around is through.”
– Robert Frost

“You miss 100 percent of the shots you don’t take.”
– Wayne Gretzky

“A calm sea does not make a skilled sailor.”
– Unknown

“It is not the strongest of the species that survive, nor the most intelligent, but the one most responsive to change.”
– Charles Darwin

“People are best convinced by things they themselves discover.”
– Ben Franklin

“To swear off making mistakes is very easy. All you have to do is swear off having ideas.”
– Leo Burnett

“If I had asked people what they wanted, they would have said, a faster horse?”
– Henry Ford

“Your most unhappy customers are your greatest source of learning.”
– Bill Gates

“The client is not always right.”
– Enzo Ferrari

“The greatest asset of a company is its people.”
– Jorge Paulo Lemann

“A mistake is simply another way of doing things.”
– Katharine Graham

“Building a mission and building a business go hand in hand.”
– Mark Zuckerberg

“There is no such thing as a free lunch.”
– Milton Friedman

“You’ve got to love what you do to really make things happen.”
– Phillip Green

“We didn’t know how to run a business, but we had dreams and talent.”
– Ruth Handler

“Innovation distinguishes between a leader and a follower.”
– Steve Jobs

Getting the Most From Your Event

How To Plan Your Company Away Day

How To Plan Your Company Away Day